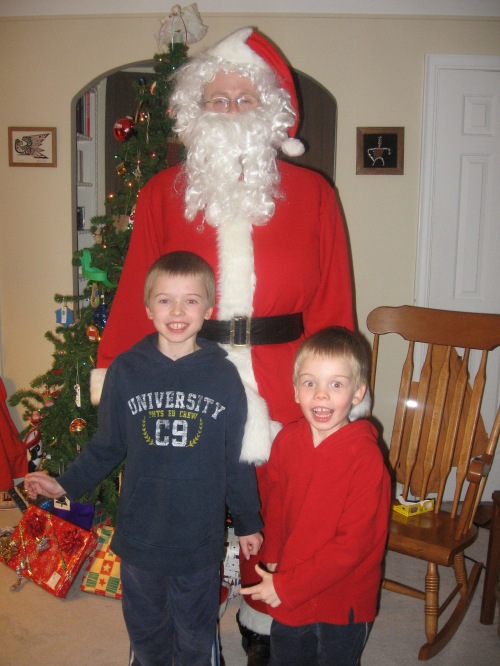 My only picture of my boys with Santa. Okay, it’s their dad dressed as Santa, ready to head out and delight/scare (several did cry)neighborhood kids.

I grew up without a Santa Claus.  Sure, I visited Santa at the mall for many years as a child.  And the presents in our stockings?  They were always addressed from Santa, in handwriting that was undeniably either belonging to one of my parents or to me.  On Christmas Eve, however, filling the stocking with a few of the basics was my job.  The orange or apple (for me — I didn’t like oranges) went in the toe.  Chocolate or nuts in their shells followed.  During filling, I’d pose for the annual “laying (her) finger aside of (her) nose, and giving a nod, up the chimney (she) goes” picture, head tilted, finger places, sack across my shoulder.  I’d leave cookies out for Santa and head to bed, too excited to sleep past five or six the following morning.

I’d awake knowing a present (always a book) was hidden, wrapped in my room.  Designed to keep me occupied and contained until the more reasonable hour of seven or eight, the book was the first sign that Christmas had begun.  Upon descending the stairs (with my parents at the appointed hour), I’d nearly burst with excitement at the sight of the overflowing stockings and the gifts under the tree.  The routine was stockings first, followed by sour cream  coffee cake for breakfast, eaten in the living room while we opened presents to a crackling fire and Christmas music.

But Santa?  He was just a story, a part of a poem, a guy at the mall dressed up to pass out candy canes.  I never recall believing in a Santa who came down the chimney and brought presents.  My parents confirm that they’d never taught me to believe, meaning I never had to unbelieve.  As an older child, I had friends whose siblings believed, and I was amused at the ends to which their parents would go to convince these younger ones that Santa was real.  For one family I knew, Santa wrapped in comics.  For another, only stocking gifts were from St. Nick.  Others wove more elaborate tales and ruses to extend the time which their children would believe in Santa.

I don’t recall any ugly confrontations, but it’s possible that in my youth I ruined Santa for a friend or two before I understood that the old man was meant to delight and that other kids really enjoyed it.  I certainly never gave the secret away once I understood that Santa was important to some families.  When my first son entered the age of Santa reason (the Christmas he was two and a half), his father and I were Santa-neutral.  We neither encouraged nor discouraged belief, and given that sitting on a stranger’s lap at the mall was one of the last things our older would have chosen to do, this wasn’t a tricky tightrope to walk.  His paternal grandparents, on the other hand, were full of Santa sentiments.  “What do you want Santa to bring you?  Did you see Santa?  Be good!  Santa is watching.”  He was their first grandchild — the only until our second child came along two years later — so all the kid-Christmas energy went toward him.  Being the rather distracted child he was (and is), he seemed to let it go by.

By three and a half, he was aware to the Santa story.  His paternal grandparents kept up the Santa talk, at least until my sensitive, anxious older son broke down.  Santa scared the crap out of him.  We assured him there was a cap on our chimney, showing him from outside.  We worked the logic end of the equation.  We told him we were Santa (and other intruder) safe.  Even his grandparents said Santa could deliver his presents to the mall, for his parents to pick up.  When the anxiety reached its peak, we told him point-blank — Santa isn’t real.  He’s just a story.  He’s supposed to be a fun story.  My older son was inconsolable.

How did he manage to continue to believe in the face of his parents’ honesty on the subject?  I’m not sure, except that all the other regular adults in his life, from daycare to parents of friends, talked the Santa talk.  We were in the minority and, I guess, not terribly convincing.  The fear continued the next holiday season, and we repeated our reassurance.  For a child with a scientific mind and high ability to reason, he was tenacious in his fearful belief.  Somewhere in the next year, about the time he lost his first tooth, he left Santa behind.  (No tooth fairy, either.  Way too scary to have a stranger in your room at night.  He left teeth on the kitchen counter and was wise to the deliverer of the dollar bill.)

Our matter-of-factness et al bit us in the rear in the start of second grade, ironically the semester that was to be my older’s last in school before coming home.  I received a call from his teacher during the day in late fall.  She notified me that my older had outed Santa in his class of first and second graders.  Not maliciously.  Not condescendingly.  Just honestly.  And then he promptly outed the tooth fairy.  Somehow, he left the Easter Bunny alone, although his teacher may have pulled him aside before more revelations were made. Interestingly, she said no damage was done.  The kids simply didn’t believe him.

He was flummoxed as to what he’d done wrong, and we assured him telling the truth was, generally, the right thing to do.  We did manage to convince him that believing in Santa was important to many children and their families.  To honor that, we asked him not to give the truth away.  We were met with incredulity: “A stranger coming into your house at night!?  What’s to like?!” We went through a list of his friends who believed and asked for his help in withholding his information about Santa (and the other characters) until we let him know that they already knew the truth.  This was hard for me, who values honesty above warm, fuzzy feelings about guys in my chimney.  But I think it was the right thing to do.  Every year, we’d review the list of friends and remind him to hold his tongue.  He did a fine job, as far as I know.

His younger brother never had much Santa exposure, what with having a brother who thought the idea was akin to being stalked by zombies and not having daycare to preach the Santa message.  Still, his dad and I maintained a Santa neutrality, not teaching Santa but not debunking him every time a family member or friend invoke the guy’s name. By four or five, he asked.  After asking him what he thought (“Just tell me mom.”) and saying that we were all Santa to each other (“Mom!  Just tell me!”), I told him the truth. This confirmed his thoughts, and he was quick add that he was sure the tooth fairy and Easter Bunny were also lies (his word).  As I had with his brother years earlier, I told him not to tell so as not to ruin the fun for those who believed.  As a child who longs to enlighten the world about all that he finds true, this silence is hard for him, but I don’t think he’s slipped yet.  At least, I haven’t received any phone calls from parents or seen friends of his in tears in December.

So next Saturday night, I’ll fill stockings after the boys have put in an apple or orange into each.  Come morning, my younger will likely wake me early while his teenage brother snoozes longer.  We’ll stay upstairs until 8, or at least 7:30, in an attempt to let their grandmother sleep a bit longer.  Then we’ll open the stocking that we filled together, eat sour cream coffee cake, and open the presents under the tree, gas fireplace on and Christmas music playing.  And we won’t ruin Santa for anyone.

5 thoughts on “No Santa, Baby”